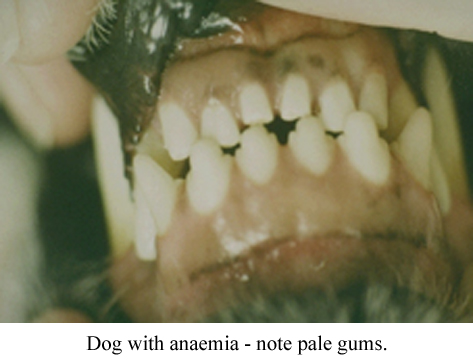 Anaemia occurs when the amount of haemoglobin is reduced. Haemoglobin is the red pigment responsible for the colour of blood.  It is contained within the erythrocytes or red blood cells. It can be due to a reduction in the total number of circulating red cells or to a reduction in the amount of haemoglobin carried by them. Both problems can sometimes occur simultaneously resulting in anaemia.

Anaemia is not a disease in itself but results from other disease processes.

What are the common causes?

What are the usual signs of anaemia?

Anaemia is sometimes quite severe before any clinical signs are apparent. The most easily observed sign is pallor. Instead of the normal pink colour of the mucous membranes of the gums, the inside of the lips or eyelids, they appear pale. As anaemia progresses the dog will lack energy, have difficulty breathing particularly after exercise, and may collapse.

"Anaemia is sometimes quite severe before any clinical signs are apparent."

How is anaemia diagnosed?

Confirmation of the clinical diagnosis depends upon laboratory tests. These include:

This is the most common test and can be performed in most practice laboratories. Red blood cells (RBCs) comprise 35% to 55% of normal canine blood. If the result of the Haematocrit is below 35% the dog is anaemic.

This will indicate if the anaemia is due to depletion in the number of RBCs.

This will indicate if the anaemia is due to lack of adequate haemoglobin.

These are the basic tests which confirm the diagnosis and give an indication of the likely cause.

To confirm this many other tests may have to be carried out, making the diagnosis of anaemia sometimes an expensive and involved procedure. 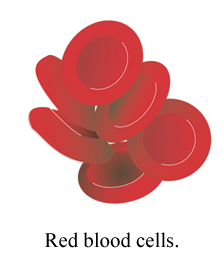 It is important to establish whether the bone marrow is responding to the low erythrocyte count, early in the diagnostic workup. If regeneration is being attempted, juvenile RBCs known as reticulocytes can be recognised.

Non-regenerative anaemia occurs when the RBCs are not being repaired in sufficient numbers. Bone marrow samples may have to be examined. In addition blood biochemistry, urinalysis and electrolyte levels are carried out routinely in order to evaluate organ functions. These help the clinician to assess the health status of the subject.

Faecal examinations are often required in order to identify possible gastrointestinal parasites that could cause blood loss, e.g. hookworm.

In addition, radiography and ultrasound scans may be necessary.

Once the definitive cause of the anaemia is established a treatment plan and prognosis can then be formulated.

© Copyright 2017 LifeLearn Inc. Used and/or modified with permission under license.