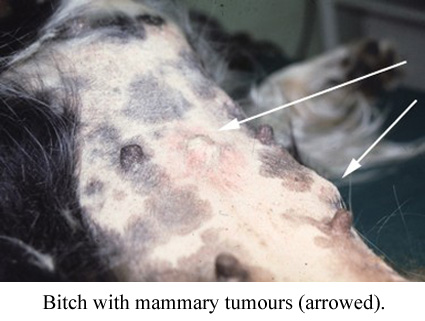 Are any particular breeds more prone?

Incidence in mixed breeds appears to be less than in purebred dogs. Breeds including Spaniels, Poodles and some terrier breeds are reported to have an increased risk compared to other breeds.

Does it occur at any particular age?

The majority of mammary tumours occur in bitches over the age of eight years. It has only rarely been reported in bitches of less than two years of age.

How is it diagnosed?

It is initially suspected on clinical examination. Often owners will notice a breast swelling during routine grooming. Very occasionally there may be an abnormal secretion from the teat of the affected breast. In cases involving malignant tumours there may be signs of spread to other organs, e.g. shortness of breath due to chest secondary tumours.

Are any particular breasts more affected than others?

Seventy percent of mammary tumours develop in the posterior (caudal or inguinal) glands. The remainder of tumours may be equally distributed through the cranial glands.

How are they detected?

The masses can vary from firm mobile nodules, either isolated or in clusters, to diffuse soft lumps that appear to be adherent to underlying tissues. Sometimes multiple small nodules only a few millimetres in diameter are noticed shortly after a season. If at all in doubt, consult us without delay.

"The masses can vary from firm mobile nodules, either isolated or in clusters, to diffuse soft lumps that appear to be adherent to underlying tissues."

What is the cause?

Like manyforms of cancer at present the cause is speculative but we do know that most mammary tumours are hormone dependent.

What is the treatment?

Just as with human breast cancer, treatment can involve mastectomy, which is the removal of the affected breast (and in the case of the bitch those adjacent) or “lumpectomy,” which is removing only the lump. The treatment will depend very much on the stage the tumour has reached when diagnosed.

Will my bitch have to have radiotherapy and chemotherapy afterwards?

Approximately 50% of canine mammary tumours are benign. Therefore following adequate excision, which is not always easy, recurrence is less of a problem than with malignant tumours. In a bitch with malignant breast cancer chemotherapy is more effective than radiotherapy.

What is the prognosis?

There is great variation between benign and malignant tumours. It is always wise to have adequate laboratory tests (histopathology) after removal. These will give an indication of prognosis.

Can breast cancer be prevented in the bitch?

The best prevention is neutering before the first season. The protective effect of speying diminishes with each cycle. After the second or third season it has little effect.

Why, then, has it been advised that my elderly bitch is speyed when she is operated on for her breast cancer?

As discussed, breast cancer is more common in older bitches. Probably more common than breast cancer in older bitches is pyometra (inflammation of the womb). Therefore if there is a risk of womb problems developing it is obviously prudent to complete both surgeries at the same time, thus reducing anaesthetic risk. However sterilisation at this age will not have any effect on subsequent possible development of breast cancer. We will be more than happy to discuss the advantages and disadvantages with you.

What if my dog is too old to undergo major surgery?

This is a situation with which we are very familiar. We will discuss the situation carefully after examination of the patient.  If she is ill with another condition or, after assessment, it is considered that the risk of major surgery is too great, careful monitoring of the lump can be carried out. If the tumour is very slow growing no action may be taken. Otherwise we may suggest biopsy under a local anaesthetic in order to arrive at an informed decision.

Why is the wound so large following surgery?

In order to try to ensure that all the abnormal cells are removed it is good surgical practice to remove as large an area as practicable. In this way the chances of regrowth and further surgery is reduced.