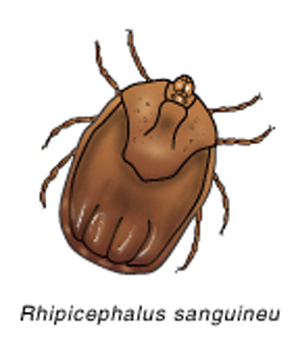 This is a tick borne disease caused by certain bacteria (Rickettsiae) that invade circulating white blood cells. A number of Ehrlichia species are known to infect dogs but canine Ehrlichiosis generally is due to infection with E. canis which is a pathogenic species found in many tropical and sub-tropical areas of South East Asia, Europe and the Mediterranean and the USA. It is spread by thetick Rhipicephalus sanguineus.

Does Ehrlichiosis occur in Australia?

Rarely. Sporadic cases have occurred in Australia but are generally confined to tropical regions of the country. Spread throughout Australia would depend upon having appropriate tick vectors. Strict quarantine measures should prevent spread of this disease. Recently, dogs in Central Australia were found to test positively for Anaplasma platae (formerly Ehrlichia) but no clinical disease was noted.

What can I do to reduce the risk if I am moving overseas?

If you are planning to take your dog overseas, consult us and we will do our best to help. Using appropriate anti tick preparations is wise but there is still some risk because most preparations do allow the tick to bite and attach, and therefore possibly infect your dog before they absorb the preparations and die.

Is it only dogs that are affected in areas where the disease is prevalent?

Infection with E. canis is restricted mainly to dogs although there are reports of people being affected in the southern United States. Cats can become infected with Ehrlichia species but these are not usually the same as those affecting dogs. Disease in cats is rare.

What are the signs of the disease?

A non-specific phase of the disease follows the incubation period of 8–20 days. Signs include lack of appetite and enlarged glands. Blood tests will show anaemia and a low white blood cell count. Dogs usually recover from this stage spontaneously but then enter a sub-clinical phase. If their immune system is not compromised they will then recover. However if they are off colour for any other reason or their immune system is under challenge, chronic infection can develop.

"Signs include lack of appetite and enlarged glands. Blood tests will show anaemia and a low white blood cell count."

German Shepherd Dogs and Dobermanns are particularly susceptible to chronic Ehrlichiosis and it is often associated with other diseases involving insect vectors. These include Leishmaniasis, which is transmitted by sandflies and Babesiosis which depends on the same tick vector, Rhipicephalus sanguineus.

With the chronic disease severe nose bleeds are one of the usual signs together with haemorrhages within the mouth and other severe bleeding disorders. 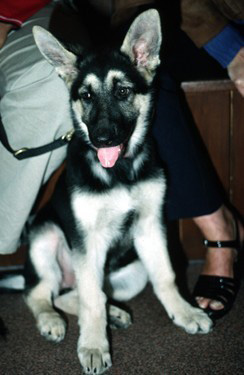 If my dog is off colour and showing these vague signs of the acute illness, can the condition be positively diagnosed?

The condition can be diagnosed from blood samples. The problem is that in Australia we are unused to seeing the disease and therefore it may take some time for a positive diagnosis and specialized laboratories may need to be utilized. Given the rarity of the disease and effectiveness of quarantine the chance of having this disease is negligible.

Can the disease be treated?

Antibiotics and other drugs are available that are very effective. If chronic bleeding is taking place supportive therapy with intravenous fluids and/or blood transfusions may be required.

Can the disease be prevented?

There is no vaccine presently available for Ehrlichiosis. However certain drugs including those used to treat the disease have been shown to be effective in prevention. Please consult us and we will discuss this with you.

It must be remembered however that Australian dogs do not have any inbuilt resistance to diseases such as Ehrlichiosis and avoidance of exposure to the infection is the wisest precaution.