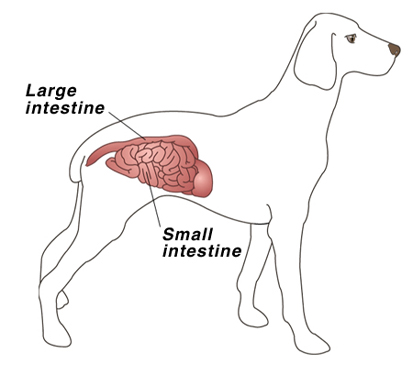 What is inflammatory bowel disease?

Inflammatory Bowel Disease (IBD) is a chronic disease of the intestinal tract. Occasionally, the stomach may be involved. Most affected dogs have a history of recurrent or chronic vomiting and/or diarrhoea. During periods of vomiting or diarrhoea, the dog may lose weight but is generally normal in other ways. As a rule, most affected dogs eat well (or even have an increased appetite) and appear normal.

What causes this disease?

The cause of IBD is poorly understood. In fact, it appears that there may be several causes. Whatever the cause(s), the end result is that the lining of the intestine is invaded by inflammatory cells. An allergic-type response is then set in place within the bowel lining. This interferes with the ability of the dog to digest and absorb nutrients.

For some dogs, dietary components are speculated to play a role in initiation of the disease. Bacterial proteins may be involved in other cases. In most instances, an underlying cause cannot be identified.

How is IBD diagnosed?

Firstly blood tests are likely to be taken to establish if there is an exocrine pancreatic insufficiency, i.e. if digestion is normal and whether the digested food is being absorbed correctly. Depending on the results, special diets may then be tried depending which part of the bowel appears to be most involved. These diets include hypo-allergenic foods, low residue diets or high fibre foods. In addition if it appears from the blood tests that bacterial overgrowth is present, drug trials may be instituted involving administration of certain drugs and monitoring improvement. Finally it may be necessary to obtain biopsy samples from the bowel, either via the oral route using a flexible endoscope or in some cases following an exploratory surgery where the bowel is examined during the operation for signs of disease and portions of the diseased tissue are biopsied for further tests.

When a diagnosis of IBD is made, the dog is placed on a hypoallergenic, low residue or high fibre diet for eight weeks or more. This helps to identify the contribution of dietary components to the problem. Although this is not a common cause of the disease, it is easy to treat if an acceptable food is found.  If the dietary trial does not offer any improvement, medication is used to control (not cure) the problem. Since not all dogs respond to the same medication, a series of drugs may be necessary.

"When a diagnosis of IBD is made, the dog is placed on a hypoallergenic, low residue or high fibre diet for eight weeks or more. This helps to identify the contribution of dietary components to the problem."

What is the prognosis?

Once the appropriate drugs or diet can be determined, many dogs are maintained on these for life, although dosages of the drugs may eventually be decreased. Occasionally, a dog will be able to stop drug therapy at some point.

Whilst most dogs do well for many years; others require alterations in therapy every few months. Unfortunately, a few dogs will ultimately become totally resistant to treatment.

Some severe forms of canine inflammatory bowel disease may eventually progress to intestinal cancer. This finding is well documented in human beings and, in recent years, it has become apparent that this occurs in dogs, as well.