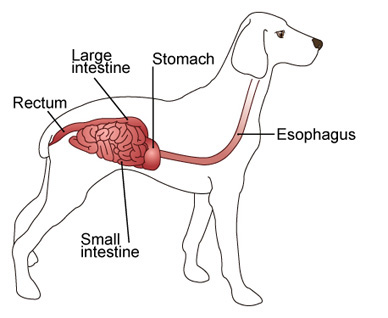 Probiotics contain normal naturally occurring bacteria and yeast, and are used to re-colonise the gastrointestinal tract when the normal balance of microflora (bacteria) has become disturbed. Many products are available, containing a variety of species, including Lactobacillus, Acidophilus and Saccharomyces species etc.

Why recommend administration of probiotics to my pet?

Probiotics are given orally, either by adding to drinking water, to food, or given directly into the mouth. They are recommended for patients showing symptoms of intestinal disorders in order to maintain or re-establish the normal balance of bacterial flora in the intestinal tract, and to treat overgrowth of pathogenic (disease causing) bacteria. The normal intestinal balance may have been disrupted by drugs (antibiotics), a change in diet, post-operative recovery, infection or inflammation of the gastrointestinal tract (Irritable Bowel Syndrome).

"The general goal of probiotics is to displace potentially disease-promoting bacteria with those recognised as having beneficial effects."

What species of animals are being treated regularly with probiotics?

Dogs, cats, and occasionally rabbits are the usual species treated with probiotics. In Europe, probiotics are frequently used in the treatment of horses and ruminants. Clinical experience in North America, Australia and Europe in the use of probiotics in pets is extensive.

How much research has been conducted on these supplements?

How can my pet benefit from probiotics?

Probiotics have been shown to be beneficial in the treatment of diarrhea, rotaviral diarrhoea and gastric ulceration (including heliobacter infections) due to infectious causes. They may also counter the deleterious effects of antibiotics on gut microflora. They also appear to help in the treatment of inflammatory bowel disease due to their immune modulating effects. They might also assist animals with skin allergies due to food sensitivities.

Where do I get probiotics and do I need a prescription?

Discuss any of these issues with us and we will be happy to help. Although these products can be purchased without a prescription, selection of the best product for your pet can sometimes be difficult. Some animals could be sensitive to other substances in probiotic products, such as milk which is common in human over the counter products. Product reliability is also an issue as many bacteria don’t survive in heat; probiotic products that aren’t refrigerated are thought to lose much of their effectiveness. Veterinary probiotic products are far more complex than common human products.